Traditionally led by the local Mayors for Harrogate and its surrounding boroughs.

Each year the Festival launches with the customary Easter Parade through the Historic spa town of Harrogate.

Traditionally led by the local Mayors for Harrogate and its surrounding boroughs, the parade involves a musical march through the town centre with all ensembles taking part, proudly playing their instruments and giving the local Harrogate population an indication of the music to come. Following the parade, the afternoon plays host to a rolling outdoor concert showcasing the bands, choirs and dance ensembles and entertaining the always enthusiastic audiences.

Would you like to lead the parade? We are looking for a marching band to kick the Festival parade off in 2019. 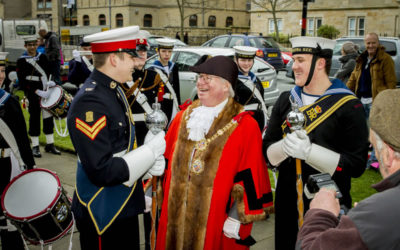 Contact us now for a bespoke quote to take part in the 2019 Festival and Town Centre Parade.
Enquire Now

Request a Call Back